GUNNAR lenses have enhanced focusing power and proprietary tints, providing you with sharper, clearer vision all while helping you focus more naturally and blocking blue light.

GUNNAR offers the only patented computer lens technology solution recommended by doctors to protect and enhance your vision.

WE ARE VISUALLY CONNECTED TO COMPUTERS, TABLETS, PHONES, AND GAMES. PEERING INTO THE DIGITAL WORLD FOR HOURS CAN DISRUPT OUR ENTIRE SYSTEM.

As digital device use increases, more and more people suffer from digital eyestrain symptoms. One cause of this is believed to be the blue light emitted from the displays of such devices. Because blue light has the shortest wavelength in the visible light spectrum it carries the highest amount of energy. Recent evidence suggests that prolonged exposure to blue light can cause damage to the retina, in particular with the development of age-related macular degeneration, which is the third leading cause of blindness worldwide.

Blue light, in particular at the 450nm point, is hard on the eyes for several reasons. This is the area that digital devices produce an abundance of that can do the most damage to the retina. Blue light between 380 and 470nm is considered harmful blue light because it can cause accumulated damage to the retina, cause cataracts, and is linked to sleep disorders.

All blue light is not bad though. Blue light from 470 to 500nm, also called blue turquoise light, is generally considered good for you. This range of visible blue light is beneficial because it provides natural reflexes protecting eyes from light overexposure and helps cognitive and memory function. It also stimulates the photosensitive retinal ganglion cells, stimulates pupillary reflex and controls the circadian cycle.

GUNNAR lenses are carefully engineered to filter and balance light while absorbing (HEV) blue light emitted from digital devices. By designing our lenses to shift the color spectrum for visual efficiency, the GUNNAR amber lens takes artificial light and precisely tunes it to the physiology of the eye. GUNNAR lenses are precision formulated to block harsh blue light, minimize glare, reduce eye strain, and improve your health and sleep. 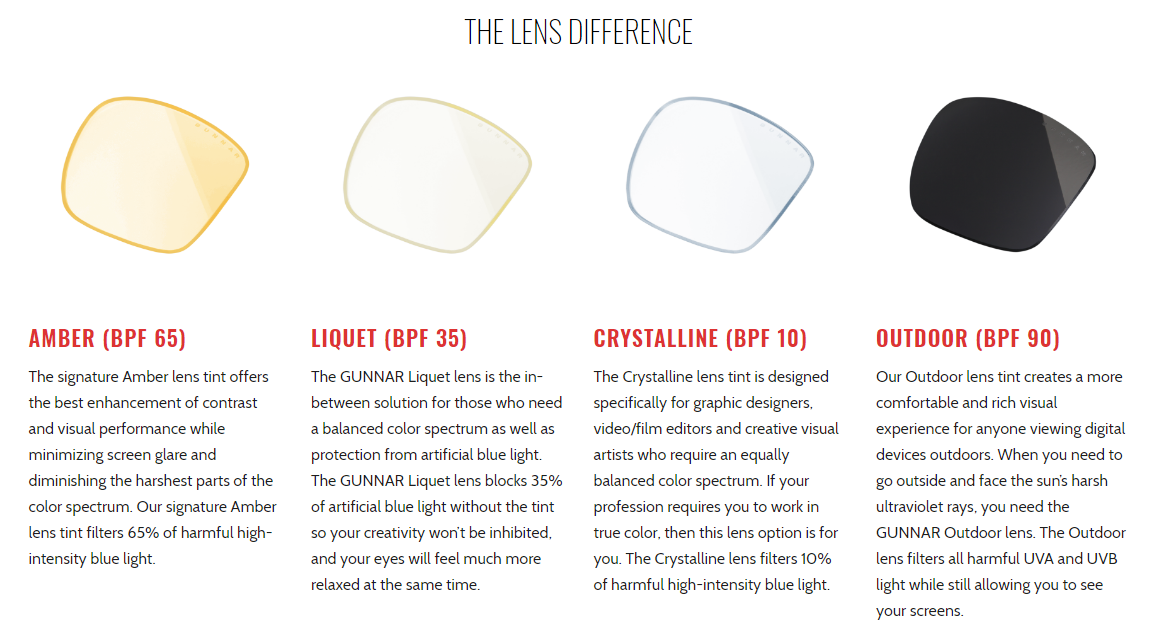 Compare Products
Compare
Clear All
You have no items to compare.
↑
Back to Top